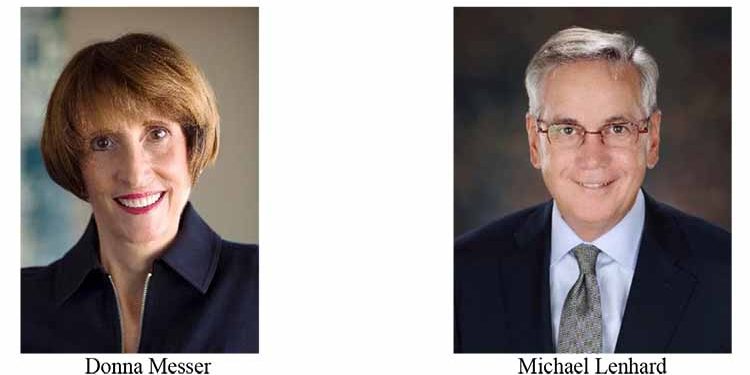 Messer and Lenhard reappointed to board

The Naples City Council reappointed Donna M. Messer and Michael J. Lenhard to the board of commissioners of the City of Naples Airport Authority. The board is comprised of five citizen volunteers who are appointed to four-year terms to govern the Airport Authority.

Appointed to the board in 2014 and currently serving as chair, Messer is principal of Carl Ryan Associates LLC, a Naples management consulting firm specializing in coaching, mentoring, team building and facilitation. She has also been affiliated with Kansas-based Overland Resource Group since 2008, consulting on labor-management collaboration. A full-time Naples resident since 2012, Messer previously spent 30 years with American Airlines in a variety of executive positions. Active within many community organizations, Messer serves on the boards for both the Women’s Foundation of Collier County and Baby Basics of Collier County. A Greater Naples Leadership Class XX graduate, she is also a member of the Collier Citizens Council and Women of the (239).

Lenhard was appointed to a partial term on the board in 2017 and is the current vice chair. He retired from National Records Centers Inc. in Dallas, Texas, as president and CEO. He has more than two decades of experience in the records and information management industry and currently serves as first vice president on the Aqualane Shores Association Inc. board of directors. A private pilot and member of the Naples Pilots Association and the Aircraft Owners and Pilots Association, Lenhard moved to Naples in 2015.